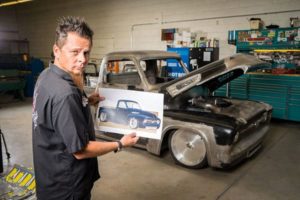 Born and raised in Salt Lake City, Dave Kindig is widely known for his work at his state-of-the-art custom shop, where automobiles are rendered, designed, built and restored into spectacular works of art. Creativity was definitely flowing through his blood from the age of five when he started taking apart Hot Wheels—chopping and redesigning them and putting his own changes on color wheels and the stance of the model cars.

Even though Dave skipped college, he likes to say he has an engineering degree in Hot Wheels. It is said that car design is an art form with few true masters, but from concept and design to build and finish, Dave has led the field with his special skills and vision in crafting the most unique one-of-a-kind vehicles on the planet. In 1999, he built Kindig-It-Design with his wife, Charity, with a small investment and a dream to design and build custom vehicles in his own shop.

The Kindig team has had many accomplishments on the way—and so many of their projects have been featured in magazines and on TV receiving worldwide attention. Dave and his shop became so recognized and respected that Velocity Channel gave them their own television show, “Bitchin Rides.” Debuting in 2014 the show was an instant hit and put Dave in the upper stratosphere of celebrity auto enthusiasts. Dave’s TV show follows the everyday work of Kindig It Design featuring his dedicated team of automotive masters who have been customizing automobiles for customers across the world since the shop opened almost 20 years ago.

Congratulations to Dave and Charity Kindig and their talented staff. Dave is an example of someone who set out on a course, took chances and accomplished his goals. His love for cars and drawing, along with hard work, determination and never-give-up attitude has helped him build one of the top custom automotive design businesses in the country.