West defeated Bingham to claim its first state title at the Valley Regional Softball Complex in Taylorsville on Thursday, May 25, 2017.

Bingham won the first game but had to play again due to double elimination rules, West won the second game allowing West to come back in a 12-6 win to win the state title. 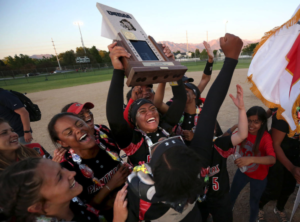 by Randy Hollis
Orginally published on May 25, 2017, in the Deseret News.

And when they did, the Miners’ hopes soon faded and were put to rest.

West High School, which lost in the state softball finals last year, came into Thursday’s 5A championship game averaging more than 13 runs per game in this year’s state tournament.

But West, needing just one more win to clinch the first state softball championship in school history, couldn’t get its offense untracked for much of the day.

The Panthers struggled at the plate throughout Thursday’s first game against Bingham — scoring just one measly run through the first six innings — and the Miners capitalized for an eventual 8-4 victory.

That forced things to a do-or-die Game 2, and West’s bats again remained silent for the first three innings, leaving the Panthers staring at a 3-1 deficit.

But finally, in the fourth inning of that decisive second game, the undaunted Panthers put together the kind of overpowering hitting attack that they’re accustomed to, stringing together seven base hits which, along with a walk and a couple of hit batters, turned into an eight-run outburst to give them a commanding 9-3 lead.

Sophomore first baseman Huntyr Ava smacked a three-run homer in the sixth to help put it out of reach, and West wrapped up that long-awaited state title with a 12-6 win at the Valley Complex.

“It’s incredible,” West High head coach Keith Lopati said, his cheeks wet with tears of joy. “It’s just incredible, especially where we started as a program up to where we’re at now, and the resilience the girls have shown and the hard work they put into it. It’s awesome. It’s awesome.

“First one in school history — and hopefully not the last.”

After losing to Riverton in last year’s 5A final, Lopati said he saw this day coming for his team this year.

“To be honest with you, I did,” he said. “This was four years in the making, with other girls coming in so, yes, to be honest with you, yes. Our two seniors that are here (Rayna Aiono and Breah Ava), they started it all, they got us on the map, and this is it right here, so it’s awesome.

“That experience (from last year) paid dividends here in that second game. Bingham played a great game, came and competed against us, and got us in the corner, but our girls were resilient and came out to win. It was great.”

Huntyr Ava, who finished the title-clincher with three hits, five RBIs and two runs scored, was ecstatic with the championship-clinching win and came up with a great analogy to describe it.

“(Mikala) kept us in the game and finished it out for us, as she should,” Lopati said.

After turning back Copper Hills by a 4-3 count earlier Thursday to reach the title game, Bingham junior pitcher Nicole Wall shut down West’s potent attack to pick up a complete-game victory in Game 1. And she kept the Panthers frustrated for the first three innings of Game 2.

“We were just thinking too much, we were thinking and we let the crowd get to us,” Huntyr Ava said of the Panthers’ plate struggles. “Our coach reminded us what we came for and we were playing for our community, we were playing like a family. That was it.”

And in the fourth frame, West finally put it all together. Ava started the game-changing rally with a single to left, and big sister Breah Ava walked. Keisha White then hit a run-scoring single, and Aino was hit by a pitch.

Bingham switched pitchers, but Karly Wightman was greeted by a hard shot off her shin from Masina’s bat which caromed all the way to the edge of the left-field grass to bring in two more runs.

Then Brianna White ripped a two-run double to the center-field fence and suddenly West was ahead 6-3.

Ulibarri then singled off the Bingham first baseman’s glove for another run, and then Rollin was hit by a pitch and Daisy Taloa sacrificed the runners over to second and third. Wall had re-entered the pitching circle by then, but Huntyr Ava followed with a two-run single that pushed the Panthers’ lead to 9-3.

“Nicole pitched a great (first) game against us,” Lopati said. “They had a great game plan for us, but our girls came through in the end and made something happen.

“I think we were seeing her enough that we started seeing (the pitches) a little bit better. But she’s a heck of a pitcher.”

“Oh man, it felt good,” Ulibarri, who pitched all but one inning for West this week, said of the Panthers’ decisive rally. “Everybody was up and then once one started hitting, it just kept going.

“I don’t think (Wall) got tired. I think we just caught up to her speed and just started hitting her.”

Huntyr Ava hit a three-run shot in the sixth to make it 12-3, and it’s a good thing, too, since Bingham (26-8) staged a mini-comeback in the seventh on a solo home run by Alandra Finneman and run-scoring singles by Sierra Brown and Jaydan Jensen, who finished the game with three RBIs.

For West’s two seniors, it was a mighty sweet way to end their prep careers.

“It’s so exciting,” Breah Ava said. “I mean, gosh, coming back from last year, it’s just a great reminder that our team can pull through anything.

“Not only last year, but from our freshman year, it’s been four years just waiting for this moment,” Aiono said. “After last year, we didn’t want to feel that feeling of losing again and taking second place. That motivated us this year, and we took it. … We were gonna get it done — no doubt.”